Covid-19 Update! New Amenities! Click to learn about all the great things you can expect from us!
skip to Main Content

One of Thomas Kim’s favorite passages in the Bible is Genesis 50:20.
“You intended to harm me, but God intended it for good to accomplish what is now being done, the saving of many lives.”
Kim and his wife, Evelyn, lost their only child, Mackenzie, in August after her nine month ICU battle. Mackenzie was born with a heart condition, never left Lurie Children’s Hospital, and underwent 13 surgeries before her passing. 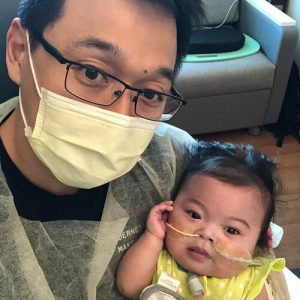 “If I could have Mackenzie back and trade her for all of these good things that have happened in my life, I’d take her back in a heartbeat, but that is not a choice that I have,” Kim said. “Now that she’s gone, I need to try and find whatever good that can come out of this.”

Kim purchased six Electrostatic Sprayers for $1,500 each – one for each of Everclean’s five current locations in the Chicago suburbs – headquartered in Arlington Heights – and one backup. The Sprayers are surgical grade cleaners and disinfectants, which kill coronavirus within 60 seconds of contact.

They are frequently used in surgical rooms, nursing homes and nowadays, airplanes; in fact Kim first saw a similar technology in use at Lurie Children’s Hospital in Chicago’s Streeterville neighborhood when Mackenzie was a patient there.

The Sprayer service, which creates a fine mist and charges that mist with static electricity to cling to hard-to-reach areas in cars, will be free of charge for all Everclean customers.
“We know we could charge for it, but we don’t want to monetize off of the pandemic,” said Kim, a Skokie native and Arlington Heights resident. “We just want to find ways to serve the community and fight this thing together.

“My wife and I have an even stronger marriage now. We have new values that have been born out of this situation. We’ve made new friends as we meet other parents who have also lost children.”

While his daughter was in the hospital after COVID-19 hit, Kim and his wife had to visit her separately due to visitor capacity limits at Lurie.

When Kim saw the Sprayer technology, he immediately thought of bringing it to his business.

“The entrepreneur brain never shuts off,” said Kim, who got on a wait list for the Sprayers and received them around the time Mackenzie passed away.

Mackenzie’s condition started to improve in June, and she was preparing to go home for the first time. Two days after Mackenzie’s planned discharge date, she went into septic shock and died in August the same week of Kim’s birthday and wedding anniversary.

Kim’s business will officially start using the Sprayers January 9th and will continue to add them as he adds locations – he would like to have 10 by the end of 2021 with hopes of full U.S. expansion in the years to come.

“We’re pretty private people. We didn’t post a single picture of Mackenzie on Facebook in order to protect her social media footprint,” Kim said. “Now, we feel one of the best ways to honor her is to tell her story, do good in the ruins, and not allow an ounce of the pain go to waste.”

© 2021 Copyrights EVERCLEAN | All rights Reserved.
Back To Top